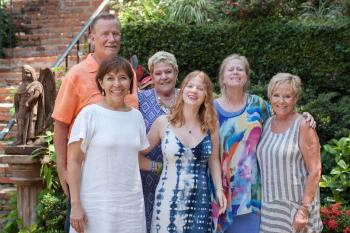 This past 27th of July Hacienda San Angel Hotel and Gourmet restaurant was host to the SPCA´s yearly summer brunch fundraiser which was another great success. The SPCA which opened in 2012 adopts an average of 230 dogs per year the majority of them finding furrever homes in British Columbia, Canada. ​

There was a lovely turn out of animal lovers and supporters. Thank you to all of those who attended, to the Board for their planning efforts, to the volunteers who made it happen, to Hacienda San Angel and their dedicated staff for donating the space, the food and attentive service!

This was an important event as it was the first one since the passing of the founder of the SPCA, Janice Chatterton who originally moved to Puerto Vallarta to mourn the loss of her son​. As time passed and the Hacienda needed less of her attention, arriving to PV as a dog foster parent, she naturally began to rescue dogs in need here in PV. The shelter grew from a small casita to an 80 bed animal shelter with veterinary services, rehab pool and now a Spay and Neuter mobile clinic. Janice depended on the fundraisers to help support the maintenance of these much needed rescue services. Puerto Vallarta is a better city today because of the efforts of animal supporters such as the SPCA.

Many supporters attended this sold out event and learned what is in store for the future of the SPCA​ Good things! There is a new passionate and active board in place; Sandra Briones, Lonna Hull, Pat Parr, Robin McCaffrey, Laura Miller and Luz Wong.  Finances are being carefully controlled to support efforts to keep rescues going 24/7 along with so much more for the animals thanks to the dedicated staff, board and supporters.

Heads Up: The SPCA is currently looking for volunteers for various tasks, specifically a volunteer coordinator to coordinate other volunteers and has skills to write grants to reach out for help and funding.  If you are interested, please write to Tina Kunkel at spcapv@gmail.com.

Janice´s daughter Paula Castaneda expressed delight for all of the supporters who showed up and the genuine caring of all involved. She stated looking forward to planning for the November fundraiser gala and is hopeful for an equally or, better yet, even more successful event.

During the event guests enjoyed a fine dining setting with violin, mimosas, a scrumptious buffet with signature prime rib, fresh shrimp, desert bar and other treats. The stars of the show were two rescue animals that were brought in from the sanctuary to enchant the guests.  Pancho, Hacienda San Angel´s resident rescue poodle (Janice´s dog) behaved himself but was not upstaged! He always steals the show.

Thank you to all who came to support such a wonderful cause that will continue doing PAWesome acts of  giving love and kindness. The Puerto Vallarta street animal population has decreased because of the SPCA among other wonderful associations who were present at this event. AngeliCAT, Colina Spay and Neuter and Brischa Rescue. Good Work all!

Stay tuned, there is so much on the horizon for SPCA thanks to YOU and Hacienda San Angel. (www.haciendasanangel.com)